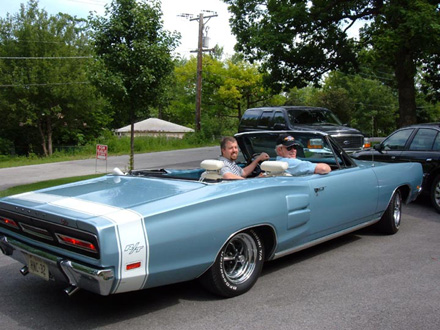 A friend across town told me his neighbor wanted to sell a Dodge Coronet and thought I should come look at it. I’m really more interested in Exner’s finned Mopars so I declined. After two weeks of badgering I went to see the car but mind you he had never bothered to mention it was an R/T convertible! I had a difficult time keeping my cool as I spoke with the seller who wanted to build a shop building to work on antique furniture in his retirement. He and his wife had owned the car 28 years but for the last ten it sat in his garage with the broken overhead door – however the door pointed slightly away from the street so no one knew it was there. With careful negotiations I purchased the car and on a new battery drove it home.
It is B3 blue with white interior, buckets, no console, column shifted torqueflite. It is a factory AC and power window car with one older repaint and is 11×3 drum brake. I threw away the Cragar SS’s rusting on the car and added full chrome 15″ Magnum 500s. After being a long hauler on the ’04 Hot Rod Power Tour, I looked into and installed a Gear Vendors overdrive and have now switched from the open 3.23 gear to a 3.50 Sure Grip. I thoroughly enjoy this car and have had it to 140 mph. That is my son in the driver’s seat in this photo and the car is in my estate papers going to him at his strong request!