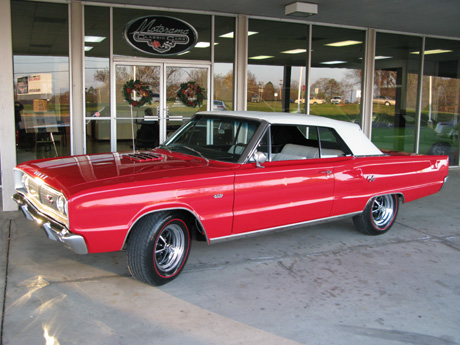 1967 Dodge Coronet R/T Convertible. Production figures range from 196 to 628 depending on who you want to believe. It is a original 440 Cu. In. car upgraded to a 426 Hemi. Current records show that there were ( 2) 4-Speeds and ( 2 ) Automatic R/T Hemi Convertibles built in 1967. I have owned this car for 22 years and it had sit in my garage for 18 of those years when 13 months ago a total rotisserie restoration was started and has just been completed. I have always wanted a Hemi R/T Convertible and since I could not find one for sale ( The only one I know of is the 1967 R/T Hemi 4-Speed Convertible sitting in Harold Sullivans collection up in Michigan ) I decided to build my own. The restoration was done by Just Metal American Muscle Car Restorations in Albemarle, N.C. ( Owner: Dale Wamsley ). They did the restoration on the 1969 Hemi 4-Speed Road Runner Hardtop that was invited to be on display next to the Million dollar 1969 Hemi 4-Speed Road Runner Convertible at Carlisle this year in building “G”. My R/T Convertible is an original Red car whith a White top. The interior was changed from all Black to the current White and Black. 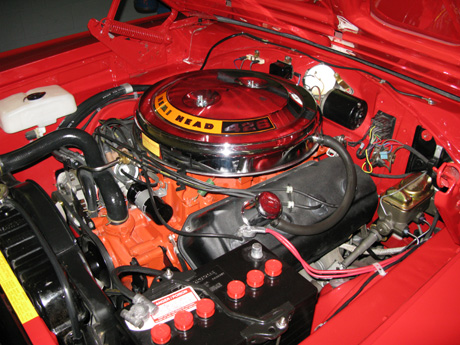 Again the 440 Cu. In. Engine was removed, set aside and the 426 Hemi was installed. The block is the new world products block. The Carbs, Heads, Air Cleaner ( I changed the little Hemi Decal to the bigger and longer one ) and Exhaust Manifolds Etc. are all factory original. I went with the high torque mini starter mainly because the original starter would not clear the side of the block even though World Products say’s that all parts are inter-changeable. K-Member, mounts and insulators are all correct original Hemi parts. Complete Hemi exhaust ordered through Year One. Car still has the factory 3.23 rear gears and new factory specs. leaf springs were installed. The front suspension is new and the drum brakes were changed to Disc.

For more information and photo’s of Richards Coronet R/T: